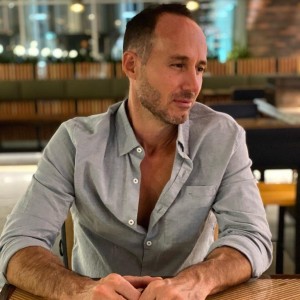 Every two weeks, your host Tari takes you on an imitate journey.  You can work privately with Tari by getting Closeness Coaching.

Couple’s yoga and AcroYoga instruction as well as lifestyle redesign available upon request.

On Wednesday, August 7, 2013, Free People Clothing organized an event at space 15 Twenty in Hollywood and asked myself and the Los Angeles AcroYoga

Mid August 2014. This month marks the one year anniversary of my standing Sports Acro and Acrobatic Gymnastics practice! Prior to August, I had only

Allow me to introduce you to two of LA’s best kept secrets: Sarah and Sarah.  By themselves they comprise much of LA’s AcroYoga teacher community

TALK TO A LIVE ACROBAT

Instagram Youtube Wordpress
Tari is an awesome instructor. He has a patient and calm presence. My partner and I did an hour and a half introductory AcroYoga class with him. We accomplished more as total beginners than we imagined would be possible. We're pumped to continue learning from him!

Shivani AChatsworth, California
Tari is an intuitive acroyoga instructor. Within only 2 private classes I was able to explore dimensions of movement I never thought possible! Tari made sure I felt safe at all times and knew when to push boundaries to optimize my full potential. I am more motivated and inspired than ever to continue acroyoga!

Sana SSan Diego, California
Tari is beyond a very cool and pleasant person. In only two sessions he managed to cover basic and very important principals so thoroughly and calmly, that helped me understand what I’m doing and most of all – helped me and my partner feel safe while creating beautiful shapes. I can genuinely say I have never experienced a teacher so calm in any situation. I always got a sense of him being in control of what’s happening. That is someone I can confide in as a teacher.